Recently I was given the opportunity to compose two pieces of music for the Harid Alumni Chamber Orchestra. Although I’ve been writing and recording music for many years, this was my first attempt at composing and creating sheet music for a real, living and breathing chamber orchestra.

Unfortunately I was not able to attend the live performance at the Harid Conservatory in Boca Raton, Florida in March of 2016.  However I do have a video of the performance of both pieces “A Moment in Time” & “Behind the Red Door”.

Performing “A Moment in Time” & “Behind the Red Door”

The first piece is titled “A Moment in Time”. I mocked up a demo in Logic Pro using virtual instruments. From there was able to generate a full score as well as individual sheet music for Violin, Viola, Cello, Bass, French Horn, Clarinet, Flute and Piano.

Demo for “A Moment in Time” 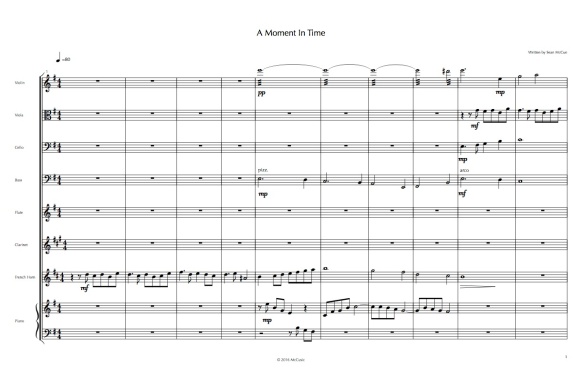 2. Behind the Red Door

The second piece is titled “Behind the Red Door”. This piece started out with Michelle Beauchesne’s cello melody. I recorded her part in Logic Pro and then orchestrated around that with virtual instruments to give the cello line some movement and lift. Once the demo was complete I was able to generate a score and individual sheet music for each musician.

Demo for “Behind the Red Door”

A huge thank you to all of the musicians who performed the music so beautifully — What a delight!